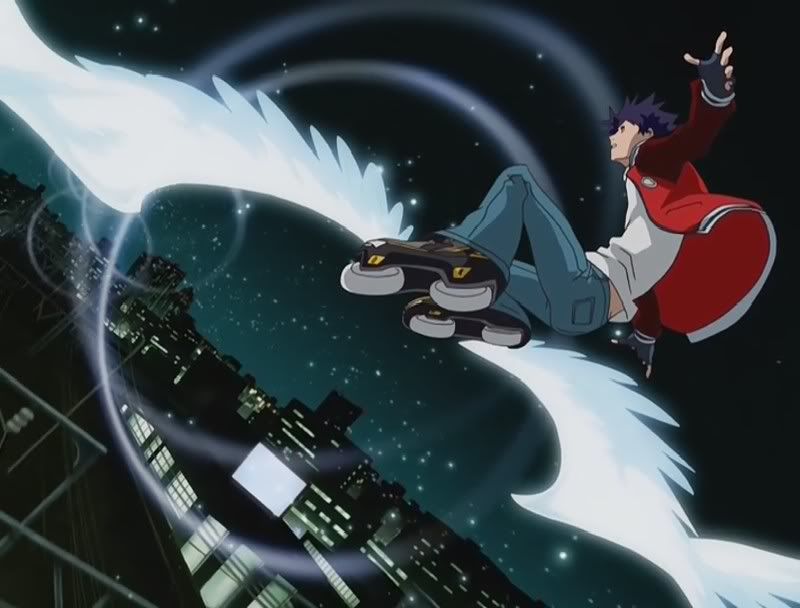 Some animes leave such an impression on our minds even after they’re gone a long time. Air Gear is one of them. Even after thirteen years, we haven’t heard of Air Gear Season 2. Why? Let’s try to find out the answer in this article!

Back in 2006, no one ever imagined that they would see sports animation series on rollerblading. And then TOEI animation released Air Gear. The viewers were excited to see something unique.

Air Gear is a Japanese sports animation TV series. It is adapted from the shonen manga of the same title. They issued the manga in the weekly shonen publication from 2002-2012 and ended it with its 37th volume.

Shomey is the director of the anime, with Kamegaki Nobuki Suzuki and Takao Yoshizawa as producers. Chiaki J Konaka is the writer of Air Gear. He is known for his other series, such as Astro Boy, Digimon, etc. 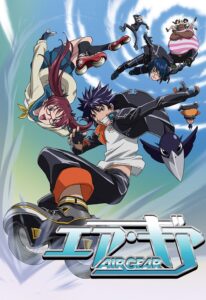 Air Gear made its first premiere on April 4, 2006. The fans saw its final episode on September 26. Since then, they are waiting for Air Gear Season 2.

Beginning as a sports anime, it tries to merges its genre. What starts like a sports genre soon turns into a typical Shounen with a completely different tone of action.

Air Gear has excellent production value, and it exceeds its amazingly sharp and smooth animation. Almost all of the enjoyment that the anime offers solely relies on its superb urban background that is very pleasant to the eyes and ears.

The smooth techno tracks make the fighting scenes even more enjoyable. Air Gear undoubtedly describes what it wants to through its action. But it is a very well known truth that a high production value can never redeem for a lousy narrative.

In this event, the storyline of Air Gear is extremely painful. It’s fun to observe how the show opens with fast-paced tracks; however, it later becomes a coerced effort to differentiate itself from other Shounen anime. 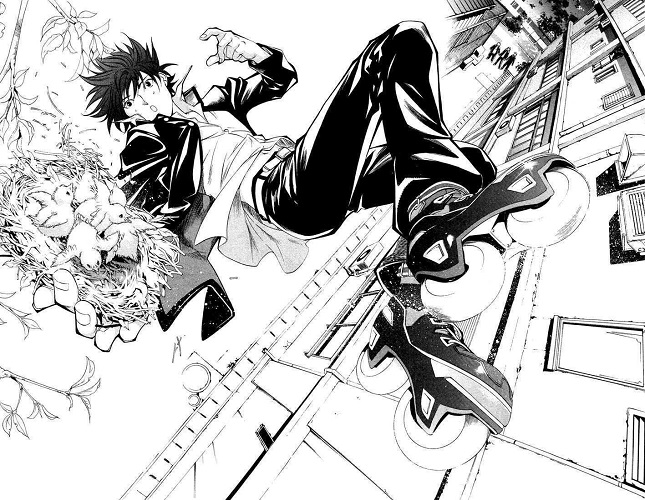 Almost halfway through the first season, the anime introduces new characters abruptly with a completely different story. Each of these personalities carries in their histories and stories.

At one point in time, the series has so much going on that it becomes difficult to get any conclusion, and thus, all of it stops with nothing but even more frustration.

Nothing can remain the same forever, because if you don’t change, you can’t improve… Facing this inescapable” reality” if you don’t grow… You’ll be crushed… For everyone to ascend and accomplish their dreams. They must grow. – Itsuki Minami.

Itsuki “Ikki” Minami, also known as Ikki, is the main hero of the manga series and anime. The narrative of the anime revolves around his adventures. Ikki was brought into a techno world by the Noyamano sisters when his parents suddenly went missing.

From this point onwards, his life takes a twisted turn and gets filled with adventures and thrill. For those who haven’t seen Air Gear, here is a quick recap of season 1!

The Narrative of Air Gear Season 1

The latest futuristic skating technology has come into the plot, which is famous as Air Treks or AT. While this technology has taken the entire world by storm, the higher authorities have inflicted certain security restraints on these that do not let them exceed a certain speed.

But there is a group of adrenaline enthusiasts known as the “Storm Riders.” They have discovered a way to meddle with the device and make it attain its full speed. 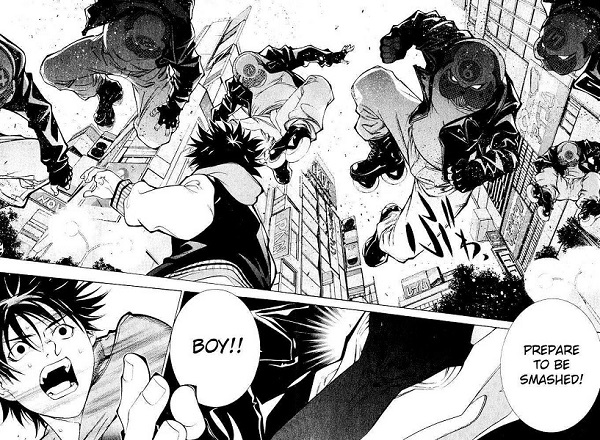 Now, such groups use Air Treks not only for traveling but also for underground fights. The ATs have become the symbol of dignity for many who want to control the streets.

Ikki made his own AT team named Kogarasumaru. Which later emerged as the winner. With the cooperation of his team, Ikki fighters proceed to become one of the best, if not the best of the Storm Riders.

During his journey to self-discovery, Ikki challenges many gangs and forces. Including the Skull Saders, who he challenged by accident.

From battling the Night King to crushing the Behemoth, Ikki and his team seem to understand no limits. However, as they move the world, one place at a time, these youths are constantly faced with danger and other rivals who seek to take them on.

The anime ends with Itsuki being allured into the Trident’s hideout by utilizing his buddies and teammates as bait. With a loyal and caring spirit, Ikki goes on to rescue his friends. And confront the Trident to a fight.

Will The Show Ever Come Back?

After getting mixed reviews and responses from the viewers and critics, there are very few chances that the anime will ever come back with Air Gear Season 2.

The anime fans still have high hopes from the production team. But even after almost thirteen years, we haven’t heard anything from the makers about the official release date of the second season.

Is There Enough Source Material for Season 2?

For any anime to continue, it requires content. To find the answer to the question, will the anime come back? We need to examine a few essential elements in the reference material.

Is the manga series continuing? Because if the story ended, that could be the reason why the second season has a tough time to arrive what happened with the Konosuba Season 3.

After that, we also need to discover how many manga volumes the anime and OVA used. There are anime sequels like No Game No Life Season 2 that haven’t arrived yet because there was insufficient content left to use after the first season. 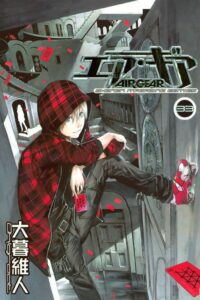 The first season of Air Gear arrived with twenty-five episodes, which covered the first twelve books of the manga series. In opposition, the manga has a total of thirty-seven volumes.

Hence the makers have sufficient reference material to produce Air Gear Season 2. They can even execute more than one season with the spare sections of the manga.

But it’s the sales of the anime that is a matter of interest as the overall sales include DVDs, stock, and even online streaming, and after combining all of that up, the numbers aren’t satisfactory.

Today, many animes get a series even without DVD sales, like in the instance of One Punch Man Season 3.

Even after this long pause, the production team hasn’t announced anything officially. This raises questions among the fans that why there is no Air Game Season 2 yet? Let’s try to understand why!

The first season of Air Gear did well and grabbed everyone’s attention all over the world. But, the producers didn’t earn the profit they assumed from it.

Even back then, the production of the show costs $780,000. And if they deliver a twenty-five episode sequel now, the production expense will be more than doubled. There will be a risk if it will gain much popularity or not after all these years. Therefore the makers decided to hold Air Gear Season 2.

What To Expect from Air Gear Season 2 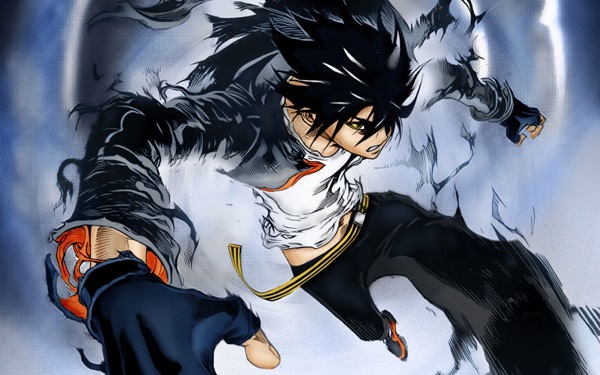 The first season carried the story to an end and tied up all loose ends successfully. Many fans believe that the final episode of the first season was anticlimactic.

Having concluded the first season with Ikki defeating Sora, the viewers expect to witness more battles between them as the season proceeds. More than this, fans and readers alike can anticipate Ikki to train under his sisters and to advance his expertise and potential in the field.

After airing the first part, Toei Animation issued three original video animations (OVAs). People thought these OVA’s to be the next season. The OVAs have been taken from some books of the manga that come around much later, so considering them sequences wouldn’t be valid.

Even after the negative remarks, we still think that Air Gear has its chances. If given another chance, it can actually prove to be the groundbreaking anime that it was set out to be in the first season.

So at this point, it looks like the possibilities of getting a new season are almost negligible.