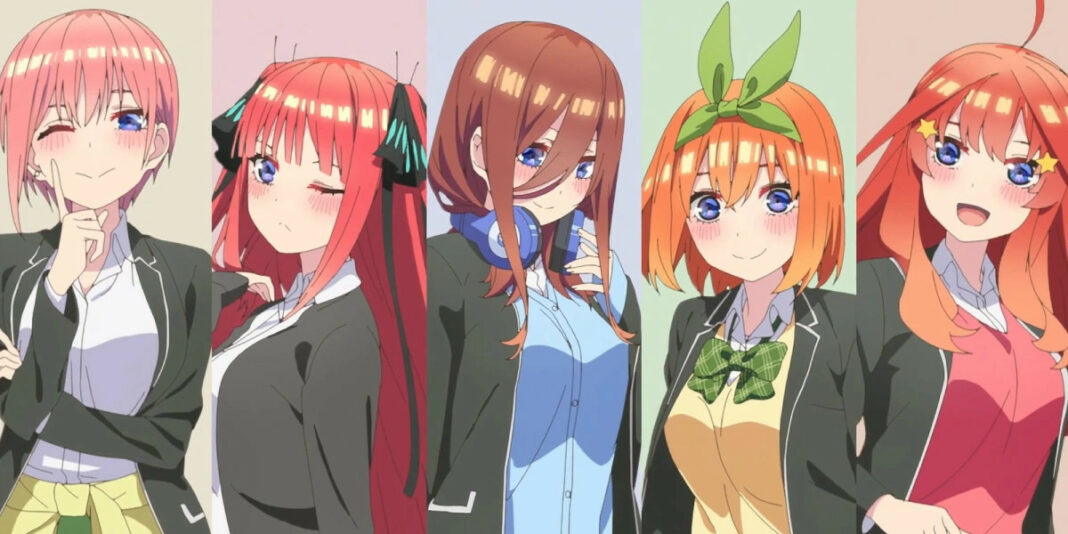 If you want a taste of the cutest animes on the planet, then you’ll LOVE this guide.

The best part is, you can binge-watch these shows with your friends all night long!

So, here are some of the most cutest anime you will enjoy in your entire life.

Tired of living the life of a delinquent, Tomoya found no purpose and began to hate his school, city, and everything else around him.

One day, his wishes were granted. A light finally shined upon the pit he was dropped into after his mother passed away during childhood.

Just like himself, a girl named Nagisa began interacting with Tomoya and became friends with him. Nagisa also had no friends and no goals until they met each other.

But that changed after Tomoya suggested she should do something new and fun. Nagisa decided to restart the drama club and asked her new friend Tomoya to help along.

Soon they form a drama club filled with the most kawaii characters that ever acted in a high school play.

This is definitely a must-watch anime if you are an anime fan that wants a show that has drama, romance, comedy, and most importantly, a cuteness overdose. 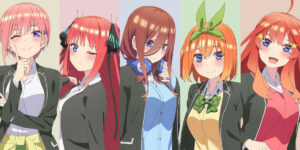 An academically gifted student who wishes to save his dad from the trenches of debt finds a job as a tutor of 5 twin sisters aka a quintuplet.

These 5 are the most delightful anime characters that one could ever find.

Comedy ensues as Futaro is unable to believe that not a single one of these young women has a good chance of passing an exam.

Soon, Futaro begins to develop a strong and unique relationship with each of the Nakano sisters.

Who knew that Futaro’s very own classmate, a young girl named Itsuki Nakano, would offer him the job that would not only pay him very handsomely but would also allow him to find his future bride-to-be.

Luckily for Futaro, Itsuki doesn’t have a two faced little sister. Each of the five sisters have a stunning personality and love doing lots of kawaii things.

However, the best part about this anime is that fans are constantly trying to predict which of the five cute but unbelievably complex personalities would suit Futaro the best. 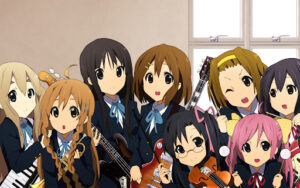 A show that has received the Best TV animation award takes the #3 spot on our list. K-on is a story of how Yui Hirasawa makes a mistake by joining her high school music club.

But, after realizing that she lacks the talent to play an instrument, she goes back to the club to apologize and leave for good.

Little did she know that the club members, who are inches away from disbandment, have decided to do whatever it takes to get her to stay in the club.

Yui was soon overwhelmed with free food, permission to slack off, and lots of instruments ready to be played.

Unfortunately, it was all in vain. Yui wanted to leave anyway.

As a last resort, the club decided to sing their hearts out in a play, hoping that would cause Yui to burn with passion and find the motivation to become a member of the club.

Guess what? It worked!

After lots of hard work and determination, Yui became a splendid guitar player and also became the soul and heart of the Light Music Club. 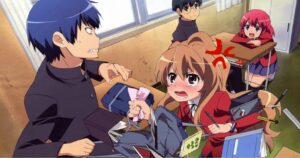 Toradora features who we believe to be the cutest character in all of anime, Taiga Aisaka.

This is the story of how Ryuji becomes labeled as a delinquent who in reality is enamored with housework and being kind to everyone around him.

One day he catches Taiga having a crush on his best friend who is the beloved vice president of the school. Surprisingly, it is revealed that Ryuji himself has a crush on Taiga’s best friend.

Both the high school students form an allegiance to help each other with winning over the hearts of each other’s best friends.

Although this anime seems like it belongs in the romantic genre, the comedy aspect comes from the fact that Taiga is the fiercest girl her school has ever seen while being extremely petite and attractive.

She is nicknamed the palmtop tiger, as a result.  But viewers quickly fall in love with Taiga after learning about her soft side. 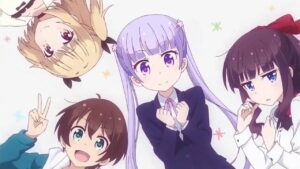 Today is your lucky day if you are an avid gamer, New game is one of the best animes for all the gamers out there.

This story revolves around an 18-year old named Aoba Suzukaze who is a gamer and has become the biggest sweetheart in the gaming world thanks to her sky-blue hair and her gorgeously bright eyes.

After graduating from high school she joins Eagle Jump, where her senior just so happens to be the creator of her favorite game.

Together, they form a team and work on a game called Fairies Stories 3.

Even though Aoba is great at designing and modeling characters, her errors happen to cause a lot of confusion and drama which tend to get in the way of trying to create the perfect game. 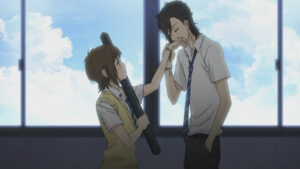 Sadness quickly gets replaced by overflowing love and joy in what we consider to be the most romantic anime on this list.

Mei Tachibana has led her high school life in sorrow and loneliness because she was once bullied and betrayed by her childhood friends.

After spending all her high school years by herself, a tall and handsome boy named Yamato tries talking to her so that she could begin opening up again.

Although poor Mei is always afraid of people being toxic to her, Yamato’s heartwarming personality gives Mei a newfound hope that maybe one day she too could make friends again.

Especially, friends that don’t describe her as “extremely gloomy” and “can’t speak”.

“Say: I love you” is very important for you to watch especially if you are someone that is shy and quite introverted. This anime assures viewers that it is absolutely fine to be a quiet person.

As proven by Mei, after Yamato falls in love with her. 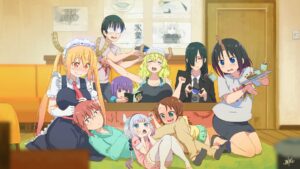 Who says dragons can’t take the main stage in a cute anime?

Once upon a drunken night, Kobayashi wanders off into the mountains and finds a divine sword stuck inside a dragon.

After removing the sword, the dragon comes knocking on her door after some time.

When Kobayashi looks through the peephole, she sees a frightening dragon, but after she opens the door, she is surprised to see that the dragon transformed into an unbelievably adorable human known as Tohru.

Kobayashi is shocked to learn that the reason Tohru came to her was to become her maid as a way of showing her enormous gratitude.

Although Tohru is as good as a maid gets, her baffling methods never fail to terrify Kobayashi.

But, in the end, Kobayashi grew closer and closer to Tohru and all her dragon friends who made the trip down to Earth.

These cute characters initially made Kobayashi’s life a living hell but soon Kobayashi began falling in love with all her new house guests. 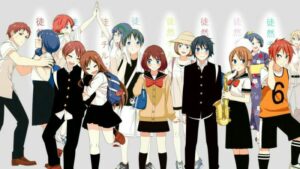 ‘Tzurezure children’ is the best anime for people who simply can’t get enough romance from all the other animes on this list.

Viewers love this show because of how it portrays all the struggles and joys a relationship could ever contain.

Each episode is a new romantic story where characters sometimes are too shy to confess their love or sometimes they are just too scared of making a commitment.

In some episodes, there is more joy than sadness and in others, there’s more happiness than despair.

What this anime does most gracefully is that it teaches viewers about how even a very common person has a great chance at having a girl or a boy falling head over heels for them.

And, since each episode is only 15 minutes long, it makes it perfect for people who are too busy to find the time to watch their favorite romantic shows on TV. 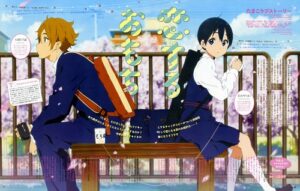 Tamako and her family run the quaint but glorious ‘Tama-ya’ mochi store.

Tamako’s life takes a turn when she meets a bird named Dera Mochimazzi who aims to find a bride for his prince who rules over Dera’s homeland.

Dera tries to complete his mission but gets addicted to mochi instead. And thanks to that the kawaii bird gains tons of weight and funnily loses the ability to fly.

Tamako also has a friend called Mochizou Ooji, who has a serious crush on her but he is unable to reveal his true feelings because Mochizou’s father also runs a mochi shop and is an aggressive competitor of Tamako’s father.

The rivalry is so fierce that both Tamako and Mochizou are not even allowed to talk to one another. Since they have bedrooms facing each other, they used a cup and string system to communicate.

This slice of life anime has gained so much popularity that it also has a movie titled: ‘Tamako Love Story’ 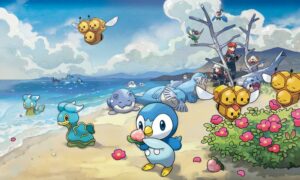 How can a cute anime list not include a show that has thousands of super cute pokemon?

As a kid, didn’t we always desperately want to have pokemons of our own?

Pokemon follows the story of Ash Ketchum as he travels from one town to another on a quest to catch and train every pokemon out there.

His goal is, and forever will be, become a pokemon master.

Accompanying him on his journey is a bright yellow pokemon named Pikachu who has the most charming voice in all of pokemon history.

As Ash visits towns and defeats gym leaders in pokemon battles, he makes new friends who join Ash on his journey to become ‘the very best’.

A great part about pokemon is that kids absolutely love this show because of all the cute things. And don’t worry, there is no fan service.

Unfortunately, there are many roadblocks along the way. Team Rocket, a criminal organization, is always on the lookout to steal Ash’s pokemon.

Each episode contains lots of epic pokemon battles between Ash and Team Rocket.

I hope today’s post gave you an idea of what kawaii anime you should watch next.
Now I want to hear from you:

Which of these 11 shows did you like the best?

Was it Toradora because of the feisty but lovely main character known as Taiga? Or was it Quintessential Quintuplets because of all the cute girls running around the house?

Either way, let us know by leaving a comment down below.

Who is the cutest anime girl?

We believe the cutest anime girl is Taiga Aisaka!

Although there are many awesome anime out there. The #1 anime is our opinion is Clannad!

Who is the cutest anime kid?

Who is cutest anime boy?

Kise Ryouta from Kuroko No Basuke

Who is the best anime girl?