Most anime fans are waiting for this one-punch man’s last fight, where he will use all his power and fight seriously, and the time has come.

Yusuke Murata, the manga artist and illustrator of one punch man manga, created one hell of a funny manga series that still has lots of action and seriousness.

One punch man anime series and manga are about heroes fighting monsters to save the world, and there are different classes of monsters.

This Threat level is the lowest, and the hero association does not know anything about the monster, so they gave level wolf but only if the monster is not damaged a lot. Still, when he started to damage much more than the threat level, they increased it and told higher b class heroes to go to the site.

If the threat level is a demon, then the area is in danger, and the monster is really strong that B-Class hero cannot handle and then top class A-class and lower Class S-Class hero.

You can say when more than one city and people are in danger from just one monster, then the hero association gives Dragon level threat, and mostly S class and A class top heroes go to fight with that demon.

Now, this threat is more like a threat to the whole Earth and humanity, and this is where all the S-Class top heroes go together to help the situation.

Now, let’s come onto the main topic: punch man’s final fight, or you can say it as Saitama and Garou’s final fight.

Garou, an A.K.A hero hunter, has already killed and injured many great heroes, including A-Class heroes and some S-Class because they are the world’s strongest heroes.

In the beginning, there were a few times when Garou tried to kill or fight with Saitama, but even not knowing Saitama knocked him down very easily. Both times Hero hunter thought it was a mistake but here comes the last few chapters of the manga, so spoiler alert!

This will be the end fight of one punch man series and an even greater one-on-one battle than any fight in this anime series.

The one time Saitama felt fun was when Boros fought him, and Boros’s full fight scenes were amazing, but the time Saitama got serious, Boros dead, and then he felt bad.

There is a theory that this fight will end Saitama because Garou got the power of God and the universe, which is stronger than Saitama.

Saitama and Garou’s fight will be the end of the series, and the fight which is going on is epic, really like amazing that it’s something you never saw in any anime fighting scenes.

He might act like a villain but still holds humanity and never hurts any normal people, and he only hunts down heroes. He even saved a boy in an episode where all heroes completely covered him.

Is This End of The One punch, man?

When One punch man began, there was much talk about Saitama vs. Goku or who is the strongest anime character. But, as many said, it’s Saitama because of his destructive power, and they have not seen his full power yet. Still, he beat any demon or god-threat monsters in one punch.

After Boros full fight with him, all fans thought this would be the final fight and Boros was the strongest enemy he had ever fought, but that’s not the truth because, after chapter 150 in the manga, we saw that Garou is way stronger than any villain or monster ever existed.

Who is Blast, and what’s his contribution in this fight between Saitama vs. Garou

This is not the first time we see Blast appearing. Still, as the story goes, we know that when Tatsumaki, who is Rank 2 of the S-Class, and Blast, who is the Rank 1 of the S-class, met each other 18 years ago when Tatsumaki who is known as Tornado of terror, was brought to death because hybrid monster attacks her house and her sister.

Still, Blast saved her and asked why she did not use his psychic power. King, protect, season, face, fact, set, ready.

The Blast also appeared when the hero association attacked the underground monster headquarters. When the tatsumaki lifted the whole headquarters of the monster association, flashy flash and Saitama stacked in between.

Blast rescued the three of them, including the monster, and even carried the black cube, which was his hobby to find them, and that’s why he kept wandering around the universe to find it.

He has impressive strength. Only Saitama and Garou, who recently evolved into god mode, will be the temporary power as it’s consuming lots of radiation.

He can also stand radiation because he keeps traveling in-universe by his dimension portal ability which is also one of the rarest and best abilities.

Garou is introduced as an antagonist with a confident, vindictive characterization driven by a deep hatred for heroes. He hates being insulted and will attack anyone who offends him.

He thinks highly of himself and uses that assertion to threaten high-ranking personnel such as heroes and Sitch. Garou will attack low-ranked heroes and Hero Association staff members if he encounters them.

Now let’s go back to Saitama and Garou’s fight.

After Saitama’s strike, Garou recovers and engages Saitama in actual combat. They start trading blows while spanning great distances and extending high into the sky.

Despite this, Garou swiftly heals his forearm and attempts to attack Saitama, but the Caped Baldy is quicker and blocks the blow. After being significantly outrun by Saitama, Garou’s body experiences a mutation due to his rage, making him bigger, stronger, and more agile.

With a barrage of punches and fist blows, Garou uses his God Slayer Instant Attack to knock Saitama to the ground. Saitama, however, soon appears nearby after tunneling beneath the Earth and tosses a large boulder at Garou while questioning the Hero Hunter whether he continues to deflect blows with martial arts. Garou responds in the affirmative while spinning both of his arms to break the rock.

Furious, Garou assaults Saitama once again and develops even more, taking on a demonic appearance with wings and longhorns.

Saitama is instantly charged by Garou, who then punches him with his open hands, sending the mountain behind him tumbling to the ground.

Garou gains two more arms and keeps attacking Saitama while clearly in a panicked state of mind. Saitama manages to evade and dodge a barrage of Garou’s blows with only one hand while also asking him to quit while being assaulted by the Hero Hunter, who employs all four limbs.

Garou forces Saitama into the Earth after unleashing a powerful assault known as Extreme Fa Jin, sending powerful seismic waves into the Earth’s core. The onslaught is so incredibly strong that it warps space around Earth, shifts oceanic plates, and rises a continent from the opposite side of the world, interfering with the magnetic and gravitational fields and causing the planet to swell.

Despite his best attempts, Saitama remains unconvinced by Garou’s powerful onslaught and responds with a series of normal punches.

Garou’s monster form is destroyed when Saitama hits him, revealing Garou’s real human form beneath his monster body and sending him flying away. Garou hears a voice calling to him as he laments the injustice of his defeat.

The speaker informs him that only one fist can defeat “The Fist that has Turned Against God.” Bang then appears to Garou in a vision, hovering above him and extending his hand.

The God mode is still evolving, and we see Saitama go mad because Garou killed, or you can say take out his core where all his bodywork or you can call it his heart. So now Saitama is mad for the first time in any fight, and let’s see what will happen in the next chapter, 168. 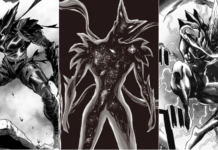