Home Anime 18 Most Famous PINK HAIR ANIME Girls you Must Know About! 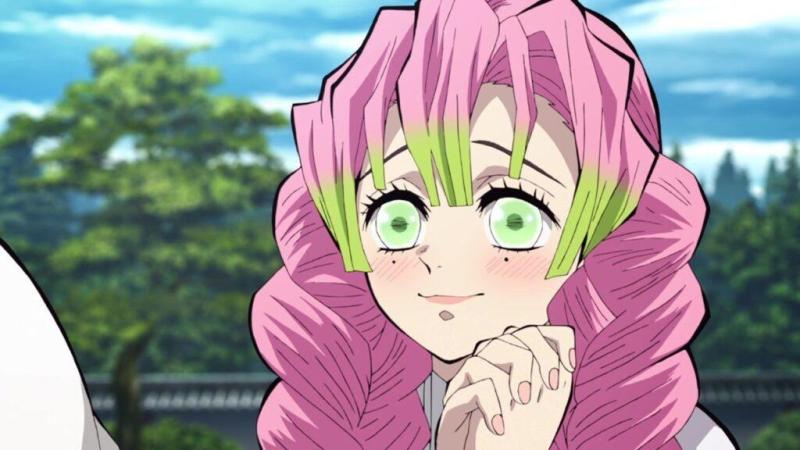 Sakura is the first on the list, and I know many of you will freak out after seeing her name first because we all know how much hate she got from the naruto series.

Remember the moment she completely beat Sasori? Or when she, like, chopped off her hair in the Forest of Death?

But, in reality, she improves, especially as she matures.

Sakura appears to be one of the better role models for parenthood, and the best achievement is to marry susake, who is the hottest guy in the naruto series, and everyone wants to be with him.

Somewhere sakura did great when she achieved the 100 healing mark, just like Tsunade, who is legendary sanin, and the whole ninja world know her because of her medical capability.

So at least she deserves to be on the one list because she is a good pink hair anime girl.

Mina is, without a doubt, the coolest person in class 1A.

She has some wicked dance moves, is generally relaxed back, and seems to get along with everyone!

Her Quirk allows her to emit acid, but not the psychedelic sort, rather the Raiders of the Lost Ark kind, which provides her with strong attacking skills as well as some crazy skills and ag since she was fearless even as a child. She was also one of the few onlookers that approached Mister Metalica.

The dandere is so powerful with this one, my heart! Despite the fact that we’ve only got a few glimpses of her, it’s reasonable to conclude she’s waifu material.

Mitsuri truly lives up to her moniker, Adore Hashira, since she appears to love everyone and everything.

She complements everything she sees, no matter how insignificant, but she only uses her inside voice to do so. Naturally

And you already know she’ll blow us all away once we see her in battle.

In Code Geass, Euphemia is one of the most approachable characters. It’s also not difficult to get along with her.

Alternatively, she may be an anime aficionado. But what comes next will shatter your heart into so many pieces that you won’t be able to put it back together.

Watch Code Geass no matter what.

Vanessa Enoteca is a member of the Clover Kingdom’s Black Bull unit of Magic Knights. She is a witch from Witches’ Forest who uses thread magic to change fate. She enjoys drinking booze and prefers to go at her own speed. Vanessa, on the other hand, does not hold back when it comes to missions and the safety of her squad members.

6.Zero Two (Darling in the FranXX)

Zero Two is an APE Special Forces member who is a human-klaxo Sapien hybrid. She has no concern for human life and even exhibits a wild disposition as a result of her klaxo Sapien blood. Zero Two enjoys alone, but she took an interest in Hiro and invited him to co-pilot the FRANXX Strelizia with her.

When Darling in the Franxx was released in 2018, Zero Two surpassed Asuna from Sword Art Online as the most female cosplayed character. As shown throughout the anime, Zero Two is a clever and mischievous guy with a hidden sweet side.

In terms of character introductions, Zero Two had a notable one.

Jumping out of the water naked and holding a fish in her mouth, she looked like a lovely mermaid.

She provides many of the show’s aww moments while also bringing some badassery to the table. By the end, she’s a little Gurren Lagann, but her and Hiro’s love never wavered.

And I’ll always roll my r’s when I say, sweetheart.

Her character design was intended to be pleasant, as stated by the character designer, and it certainly worked, maybe because of her pink hair, which makes her stick out even more than if she had a more traditional colour.

7.Ram From Re: Zero -Starting Life in Another World-

She also wears hair clips on the right side of her hair, a flower-shaped ribbon on the same side, and a maid hairband.

She is, without a doubt, my favourite pink hair anime girl and the one I most identify with. I despise the cold, winter is a curse, and Ram is my spirit oni.

8.Shirahoshi From One Piece

Shirahoshi is one of the main characters in One Piece’s Fishman Island Arc.

Princess Shirahoshi, popularly known as the Mermaid Princess, is the youngest of King Neptune’s offspring and a huge smelt-whiting mermaid.

Dorothy, the captain with pinkish-purple hair, has been a mystery for quite some time. She was always napping and tagging along with the other captains while unconscious.

This little cliché made a lot more sense when she showed what she can do.

She’s a tremendously strong magician who might appear unbeatable if you don’t utilise your brain.

Sometimes she even does some disgusting thing like a snot bubble coming out of her nose, and she’s one of the series’ cutest characters.

Everyone who grew up in the 1990s or 2000s had a thing for this nurse at some time in their lives.

After a hard day of making your Pokémon beat each other up, it’s always nice to be greeted with a kind grin.

As if no one ever questioned whether their Pokémon were safe with her. Then there was the makeover that occurred when the Black and White series began.

I’m in a quandary. My nostalgia is enraged, yet she seems much cuter today.

Because her avatar has pink hair, I suppose it would be more appropriate to call her Lisbeth.

However, according to SAO criteria, it still counts. To be honest, Lisbeth is arguably the most intelligent of the individuals that became stuck.

She became a blacksmith and one of the greatest.

And then she got paid by the individuals who were about to die, so she never had any disgruntled clients.

If anime has taught me anything, it’s to flee if you see a youngster dressed in a uniform.

Yashiry is as juvenile as they come.

Most of her motivations can be linked back to her need for a portion of food or her desire to play a horrible joke on someone.

However, if you ever assault her, she will essentially kick your ass while on auto-pilot.

Chika Fujiwara is a second-year high school student at Shuchi’in Academy and the current secretary of the high school student council. She is a lively young lady who usually has a smile on her face. She enjoys devising unusual games and ideas to entertain herself and others.

She is the cutest and best pink hair anime girl.

14.Mei Hatsume FROM MY HERO ACADEMIA

Mei is far from the most powerful figure in this universe. But I doubt Deku could compete with her ambition.

Wanting nothing more than for her “kids” to be seen by the world, she is prepared to work nonstop for days on end, never ever losing her grin.

Her ability to perceive even the smallest bits of any machine helps her to adapt to creating the heroes’ support equipment precisely.

In the anime Fairy Tail, Meredy begins as a villain!

First and foremost, she has a bloodlust for war and is uneducate, naïve, and deadly.

However, as the anime unfolds, her true personality emerges.

16.Morgiana from The Labyrinth of Magic

Morgiana fills that “badass girl with a heart of gold” void that we all have in our lives.

With her little frame and charming face, she appears helpless, but she possesses amazing power and tenacity. She does, however, have a feminine side. It mostly shows when her love interest complements her or when she is envious.

Despite her strength, she feels useless in comparison to others, and her greatest ambition is to be useful to Aladdin and Alibaba, most likely to repay their generosity to her.

Being cold at first, which is to be expected considering the chains around her legs, she slowly becomes more moe as the show goes on.

17.Yuno Gasai from the future diary

Despite the fact that Future Diary ended over a decade ago, Yuno is still considered the queen of Yandere by the majority of anime viewers, with only Satou Matsuzaka from Happy Sugar Life-giving her a run for her money. Yuno not only crossed space and time to be with Yukiteru, but she also committed herself because she was “getting in the way” of her new life with him.

Despite how odd she is, her backstory and the kindness she manages to show at the same time help save her from being completely despised by the fans, and despite the fact that the anime was a long time ago.

She is one of the best pink hair girl anime.

Kofuku is a minor deity from the anime series ‘Noragami.’ The plot of the series is quite different. Yato, a minor god, is the story’ main protagonist. He refers to himself as the Delivery God. Yato aspires to be a famous God with millions of followers. But he’s a long way from realising that desire because he doesn’t have a single shrine in his name. He undertakes odd chores for individuals for pitiful sums of money. His weapon becomes tired of him and abandons him. Yato needs to acquire a new weapon to repair her. Kofuku is a lovely character from the manga with curly pink hair. She is a God of Poverty and must deal with several challenges. She is, nonetheless, adorable and lovely.

Akatsuki no Yona Season 2 – Will Yona Get the Throne...

Akame ga Kill Season 2 – Will It Be Released In...