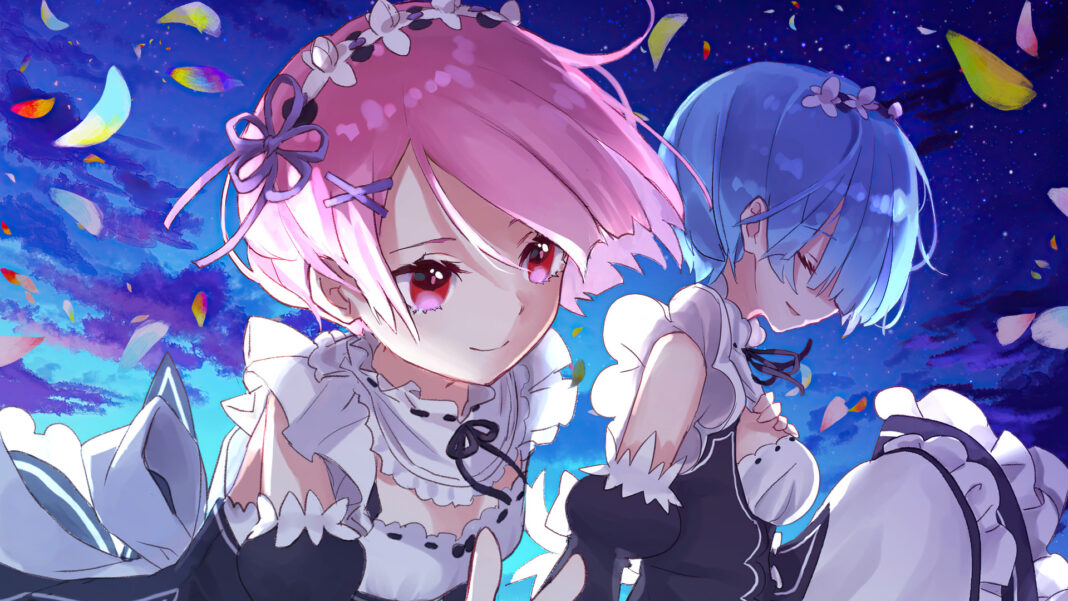 Most anime fans refer to Rem as ‘best waifu’….

But the question is why do they do that?

What’s so special about this blue haired angel that makes people helplessly fall in love with her.?

To answer that, we have found the top 5 reasons why anime fans can’t stop cheering for these two sisters.

So without further ado, let’s get right into it!

When Rem and Ram were born, they had only a single horn on their head. That meant that they were weak and not worthy of being a warrior. The villagers were not happy with that and thus decided to end their lives in order to protect their pride in being the most powerful demi-humans. Rem and Ram were beyond terrified and knew that they had to do something in order to protect themselves.

That is when Ram decided to fight back against these villagers who were shocked to see that Ram had extraordinary powers and might be the reincarnation of the ‘Oni God’. Thanks to Ram’s heroic acts, Rem’s life was also saved as a result. As a way of showing her gratitude, Rem decided to devote herself to her sister for the rest of her life. Her sense of loyalty was so immense that she sometimes covers her chest because Ram’s chest was smaller than hers.

But all was not well for long. One day, a new enemy known as the Witch Cult stormed through the village and demolished everything in their path, and murdered Rem and Ram’s parents along with all the other villagers.

Thanks to Roswald, Rem was able to hone her skills in water magic and is able to use them to heal her fellow comrades as long as their injury is just physical. Her water mana can also be used to create and customize barriers that can nullify the enemy’s power. In addition, she is also able to talk to her sister telepathically to share ideas and feelings.

However, if you haven’t noticed yet, her most fearsome ability has got to be her ‘Oni’ transformation which gives her immense physical strength that can be used to crush demon beasts without any effort. Needless to say, this person definitely does not need protecting

Ram is the prodigal child whose wind magic could cause overwhelming damage to any soul in the world. She uses a ranged skill called Fura which is a wind blade that can slice through flesh, stone, and trees. What’s even more terrifying is that the strongest version of Fura known as AI Fura can unleash several wind blades that carry the force of a gigantic rocket and the sharpness of a ultra-sharp knife.

It is impossible to find somebody more polite and gentle than Rem. In addition to her fierce loyalty and overwhelming kindness, she also carries an extraordinary amount of strength which makes sense when you realize that Ram has set a good example for her. Rem would also do anything to protect her friends. Although she lost her memories at some point, she would always show a sign that she can revert to her original self. Will Re: Zero deliver on that promise? Only one way to find out!

Remember the confident superheroes we see on ads and videos? Ram fits in that category perfectly! Surprisingly, she is the complete opposite of her sister, as she is quite self-obsessed and usually avoids people other Roswald and Rem.

How Old Is REM and Ram?

What are REM and RAM?

Rem and Ram are two sisters who are from the anime Re: Zero. They are both demi humans since they are part ogre and part human. Ram is the biggest prodigy that her village has ever seen while her younger sister, Rem, is loyal to her at all times

Are REM and RAM demons?

Yes, according to their Wikipedia page, Rem and Ram are both demon ogres who are also half human. But they are quite angelic in appearance and in personality.

Are REM and RAM twins?

Yes, they are twin sisters who belong to the people of demi humans. People who are half human and half ogre.

Are REM and RAM related?

Yes, they are related since they were born to the same parents as twin sisters.

Are REM and RAM ogres?

Yes they are half ogre and half human.

Hopefully, you now have a great idea of why people love Rem and Ram.

Leave a comment down below, and let us know what you think.